After trying for the past three years to go to Sturgis Motorcycle Rally and having trike trouble every time just before I was to leave I thought it best to check everything before heading out to our yearly BTW Trike-In that was to be held in Packwood, Washington this August. I wanted no surprises this time even though it is considerably much closer than Sturgis.

I took the fiberglass body off so I could get to all the wiring that goes everywhere. Here is a picture of the poor disrobed trike. 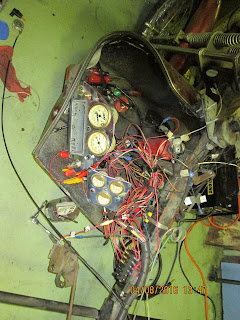 And below is a picture of some of the rats nest called wiring. 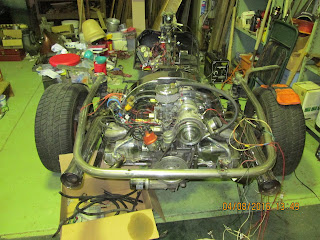 I added a fuse block. There were NO fuses at all in my trike when I bought it. This picture shows a few of the added fuses. I did quite a bit of rewiring but have a lot more to do. You might see that many of the wires are of the same color; Red. My next wiring job when I can afford it will be to completely remove all wires and replace with different colored all new wiring.

Another little project I had to complete before going on my trip to Packwood was to get the automatic transmission rebuilt. I can repair anything on a VW air cooled vehicle except the transmission. I searched all over Oregon and even checked out a place back east who advertises in our Triker magazine, all would be too expensive for my poor budget. I finally found a great deal with Marsh Transmission in Tualatin, Oregon. It only cost $600 as opposed to the $1200 ones I was seeing with other places. So I pulled out the tranny and threw it in the back of my Ford 250 Diesel truck and headed out for the 32 miles from Scappoose to Tualatin.

The transmission is quite old and I had to search a lot to find the parts. I helped locating parts since I used to own a VW shop for over 35 years and knew a whole lot of older mechanics who had such parts. It took going to two different places, one on the east coast, to locate all I needed. That done then the guys at Marsh did their magic. A few days later I was installing my rebuilt tranny and checking out everything else.

After several other repairs it was time to put the body back on my girl whom I named Wyld Chyld. I employed a couple of friends of mine who previously helped to remove the body to now get it back on. With their help all went well. I then just had to put all the bolts, wires, shifting linkages and so many other items back in place so I could try it out. All went well on the trial run.

I wanted to run some wires and hook up a trailer plug so I could take my small tent trailer, but as things will happen it didn’t happen. I instead bought a small two man tent and with my blow up mattress, no, not doll, I slept very comfortably for the three nights I camped out.

I headed out early Thursday morning since I had 130 miles, about 2 ½ hours to get there so I wanted to get a head start on the normal traffic. The weather was great. The trip was a fun ride with many people giving me thumbs up when they saw my customized trike.

When I got to the camp I located the head honcho, Kathryn Henry, who is also the Executive Director of BTW. She gets around to many of the BTW Trike-Ins all around the country. She is amazing riding her ‘57 Chevy look alike trike with a big V-8 engine all chrome. It’s quite a sight to see. I got registered and set up my tent then started to check out the place.

While I was sitting around camp talking some of the guys I looked out on the field and there were about 5 elk wandering around eating the grass. They were only about 50 yards away completely ignoring us. It was great. I spent many a days hunting for those critters and now here they are right in our camp. On the first day it the time to just get acquainted with the camp and check out the other trikes. All our meals are provided included in the registration. The meals were great.

The next day, Friday, we all got together after breakfast and those who wanted to headed out for Mt. St. Helen’s. We first went to the ranger station to get our passes then on to the mountain. The scenery was awesome and seeing the damage the explosion did to the mountain up close was incredible. We had our lunch there at a turn-out then on to a place where a ranger had a talk and pictures all about the mountain. It was so very hot sitting in the sun listing to the presentation, but well worth it.

We continued on back to Packwood after many pictures taken and lots of stories to tell the ones who didn’t make it. One of those who didn’t make it because his trike wouldn’t run was Dick Postma. Several of us checked out his trike and found that his electronic ignition was bad so he had to have another brought to him by his sister the next day. Overall, Dick missed out on both rides. A lot of pictures were taken so he could see what he missed. Below are some of those pictures. 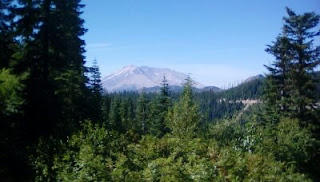 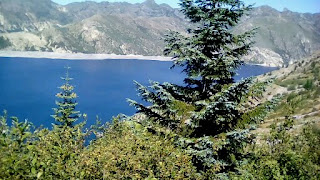 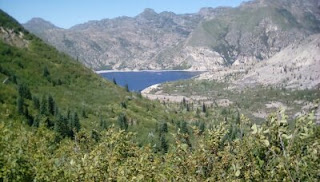 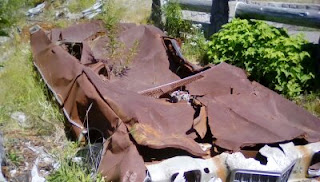 The picture above is what Mt. St. Helen’s did to a car. It was left there by the park to remind us of the enormity of the explosion. I hope Dick gets to go on the rides next year. I know I am already looking forward to going again.

Great meals and camaraderie were  had by all that night; many talking about the ride to the mountain. We were all looking forward to Saturday’s ride which will be to Mt. Rainier.

I have forgotten which day it was, but we had a lot of fun with our trike games and trike show. They got a lot of attention of the locals who were driving by.

On Saturday we all gathered together again for our ride to Mt. Rainier which again started after breakfast. I did forget to mention that sack lunches were also provided for us. Below is a picture of us stopping for lunch. 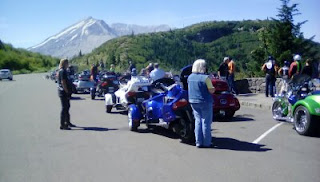 After the trips, we all had a great dinner and visiting and getting ready for our trip home in the morning. I think everyone had a great time. I will show some of the pictures of the trikes. 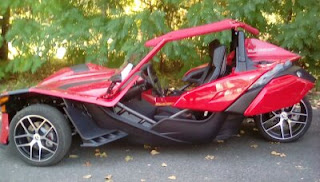 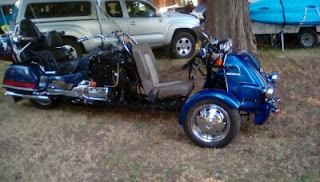 Fun was had by all and as I mentioned, I’m looking forward to next years Trike-In. I hope to see some of you there.

Posted by trikerman at 4:52 PM